The Faroe Islands: A 7 days itinerary with puffins and route map

When my friend and I went through a bunch of travel catalogues to decide where to go and saw a photo of a group of puffins on a cliff it was settled. This bird crazy lady had to go to the Faroe Islands!

The Faroe Islands are simply one of Northern Europe’s most beautiful places. When the fog rolls down from the green hills, it is hard not to be captivated by the special Faroese magic.

In this guide I have collected my favourite things to see on the Faroe Islands, a 7 days itinerary including the route on a map. And lots of other information about car rental, flights and accommodation. And of course – the most important thing! How to spot puffins!

Where are the Faroe Islands?

The Faroes are located in the North Atlantic Ocean between Iceland and Norway. The Islands are part of the Kingdom of Denmark but are self-governing. They consist of 18 little islands (the word oy – means island) most of which is connected with bridges and tunnels.

Car rental on the Faroe Islands

There are many options for renting a car in Vágar Airport. Besides the many international companies you’ll find several local ones too. We rented a car at the local Unicar.

Driving on the Faroes is fairly easy. The roads are good and the traffic very sparse. Besides not hitting one of the many free roaming sheep the only challenge is the narrow tunnels.

Day 1: Thousands of puffins at the island Mykines

After landing in Vágar Airport we picked up our car and started our road trip. We drove straight to the ferry bound for the island Mykines. The weather was amazing, the ferry trip was beautiful and when we arrived at this little charming and sparse populated island we started the hike to the lighthouse at the southern tip. Lots of steep cliffs and beautiful views. The puffin colony was on the half way and I was not disappointed. There were hundreds of them and they were not especially shy. 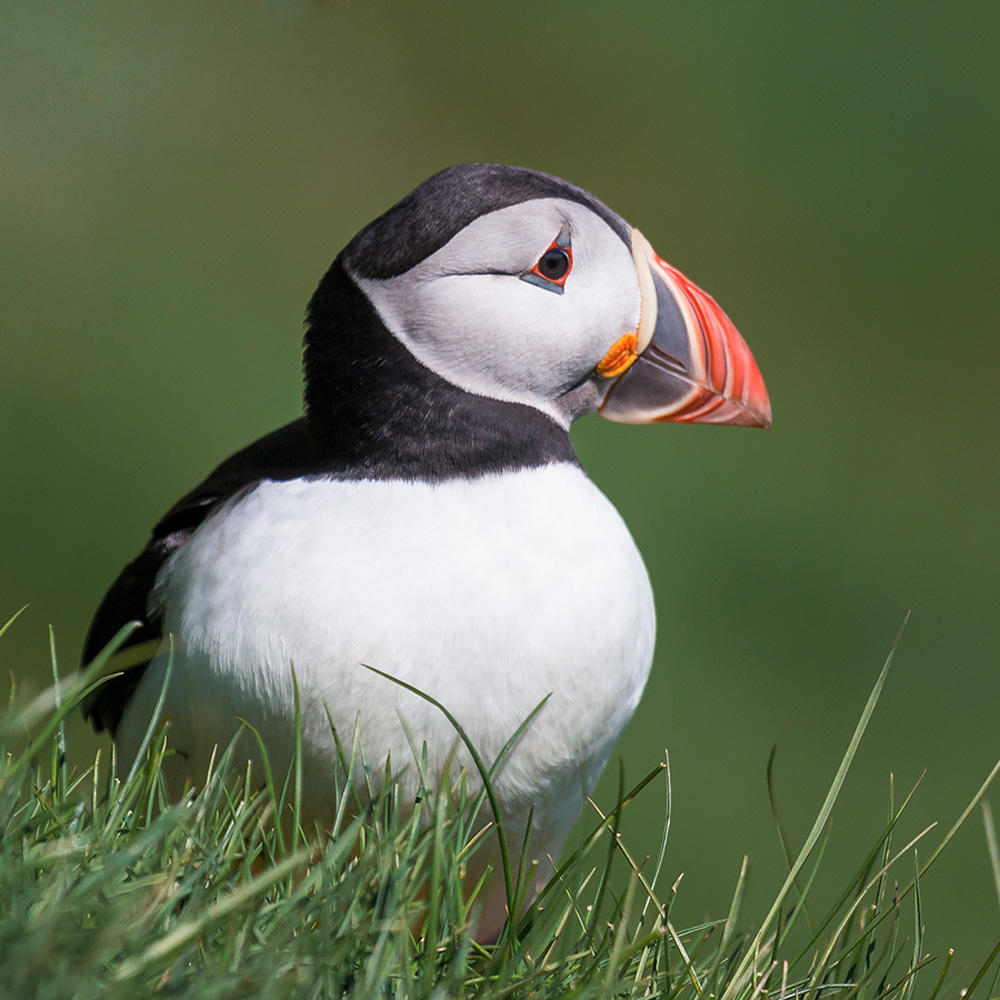 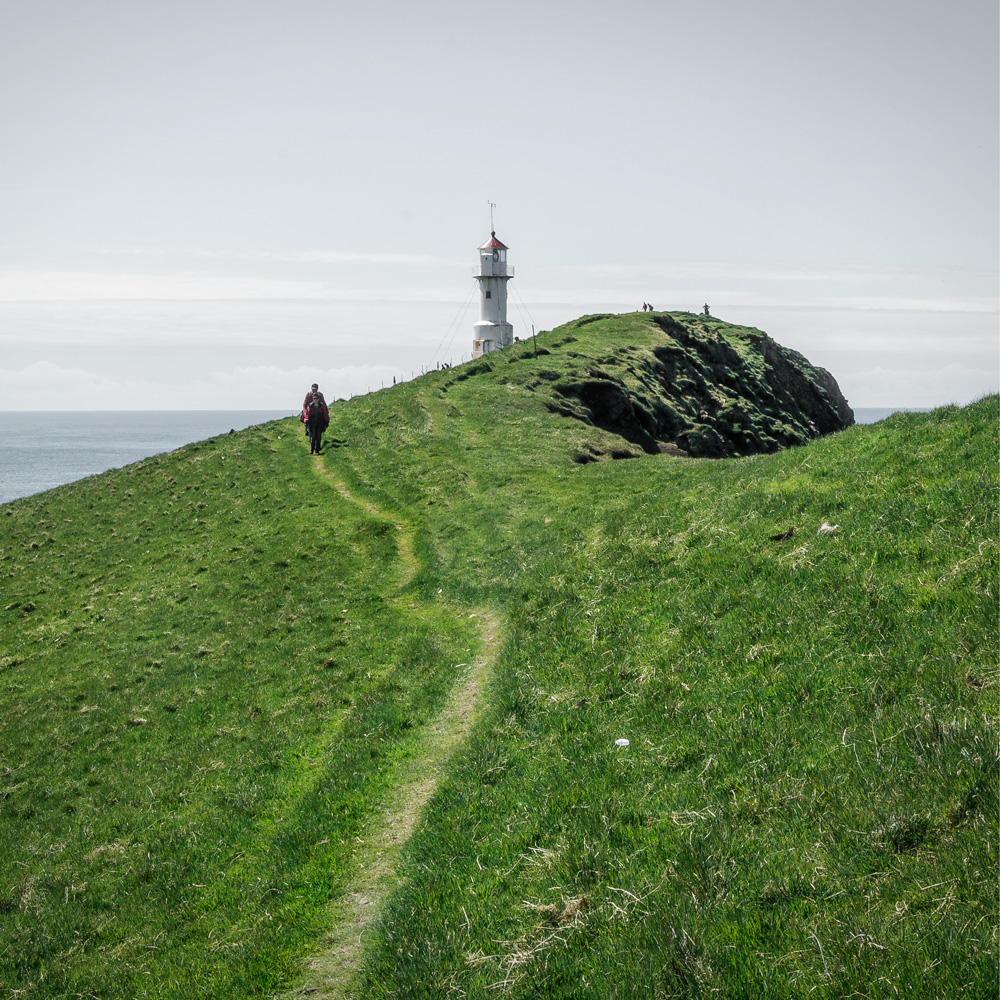 Hiking to the southern tip of Mykines 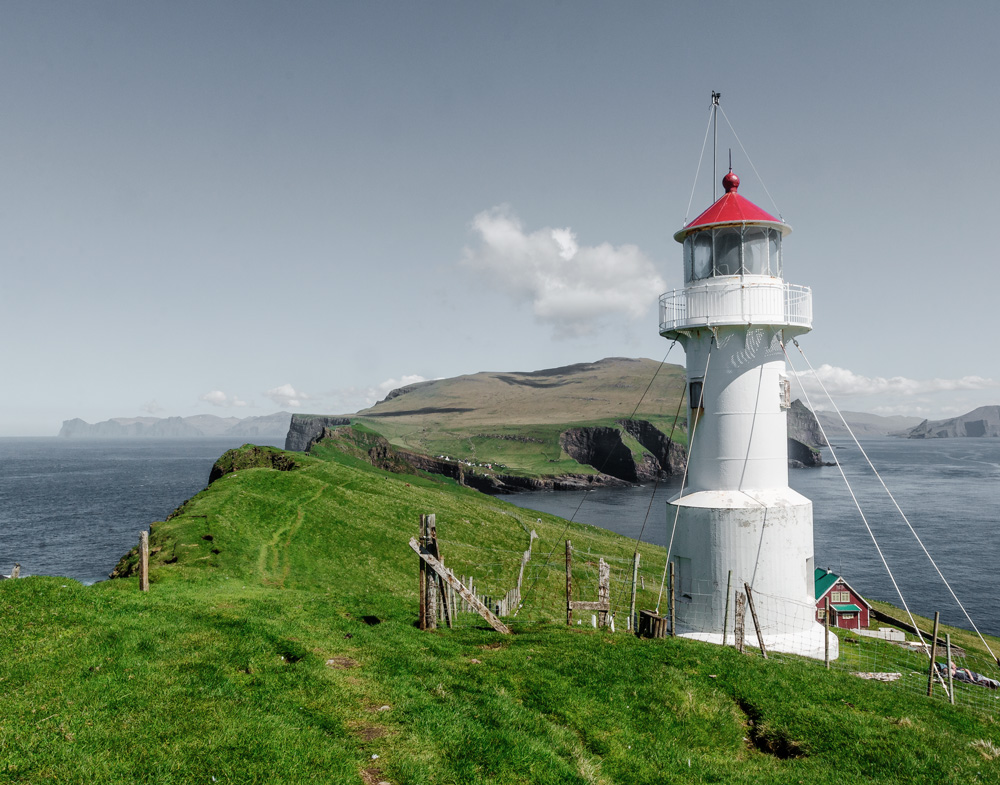 At the southern tip there was a beautiful view of the whole island and a gannet colony on a cliff – but out of reach for my camera. Late afternoon we sailed back to Vágar island and stayed at Hotel Vágar. Our room had the largest windows and I could just sit and watch all kinds of birds on the rocks outside.

Note: If the weather is bad enough it is not possible to sail to and from Mykines so don’t plan this trip at the end of your vacation – you might miss it or get stuck out there!

Car rental – the cheapest I could find

Hotel Vagar – lovely hotel right next to the airport

The helicopter to Mykines

We really enjoyed that first day of sunshine as we knew the weather would turn worse the next days. We drove to Gásadalur and it stormed and rained like mad. When we stood above the waterfall the water just blew right back up in our faces. The view is still beautiful regardless of the weather but the rest of our plans just rained away that day. 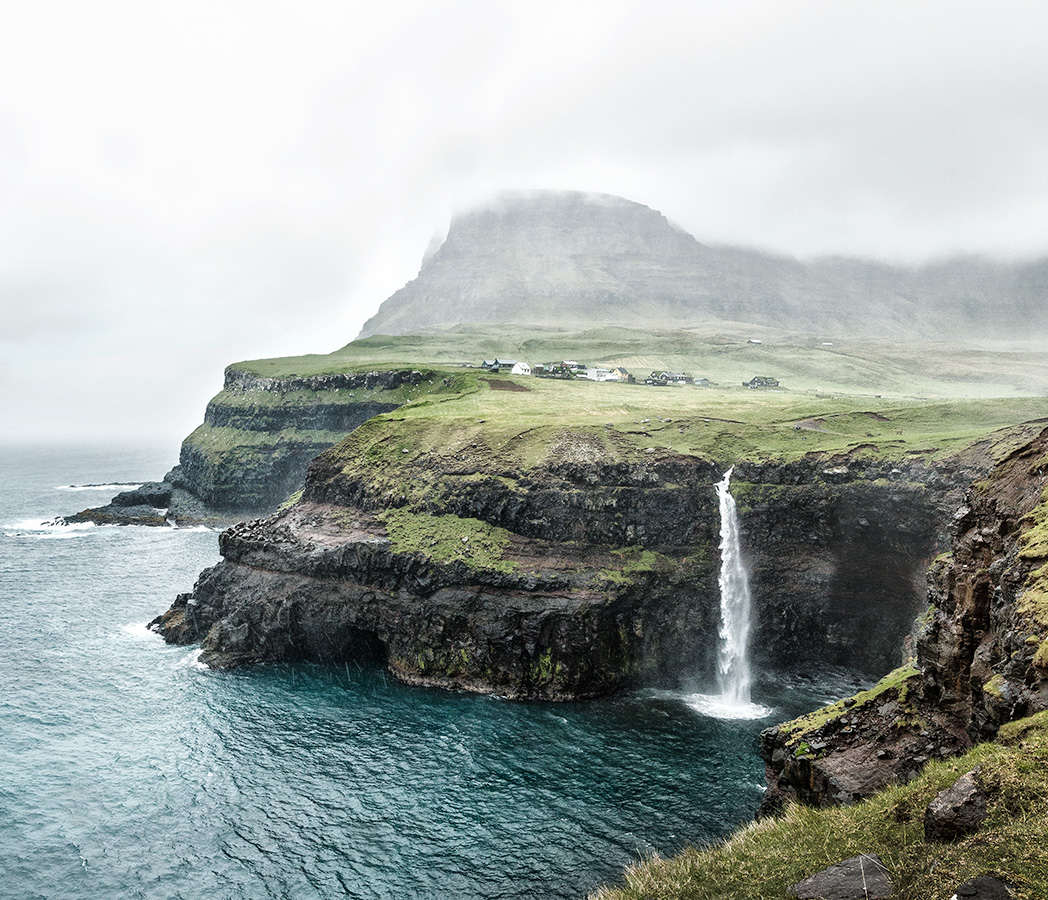 We left out hotel and drove through the tunnel to Streymoy and on to Vestmanna where we sailed out to look at the bird cliffs. We sailed into caves and through arches and it was great fun. 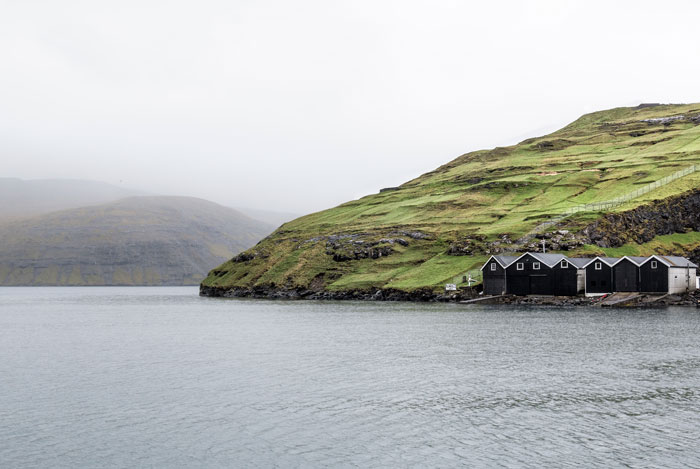 Sailing out from the town Vestmanna 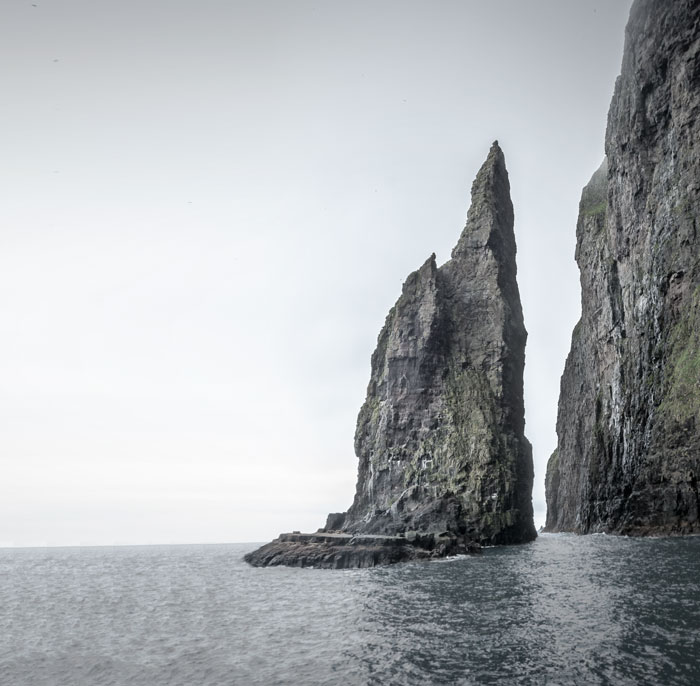 In the afternoon we drove onwards to the town Saksun and later Tjørnuvík both situated on the northern coast of Streymoy. 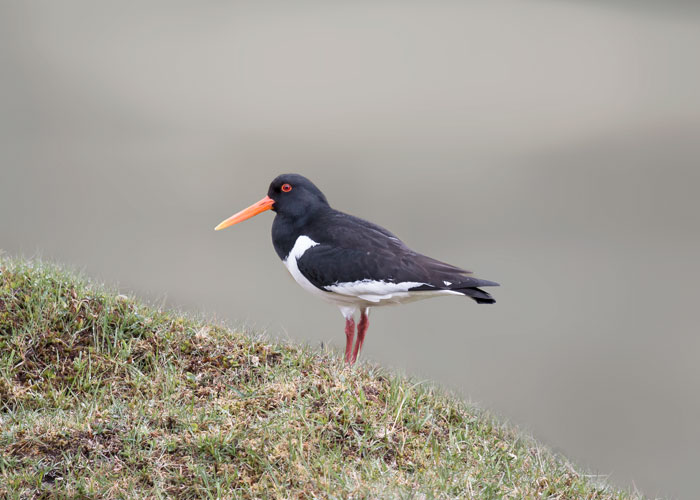 The road to Saksun was narrow, winding and beautiful with lots of oystercatchers on the way – the national bird on the Faroe Islands called tjaldur in Faroese. 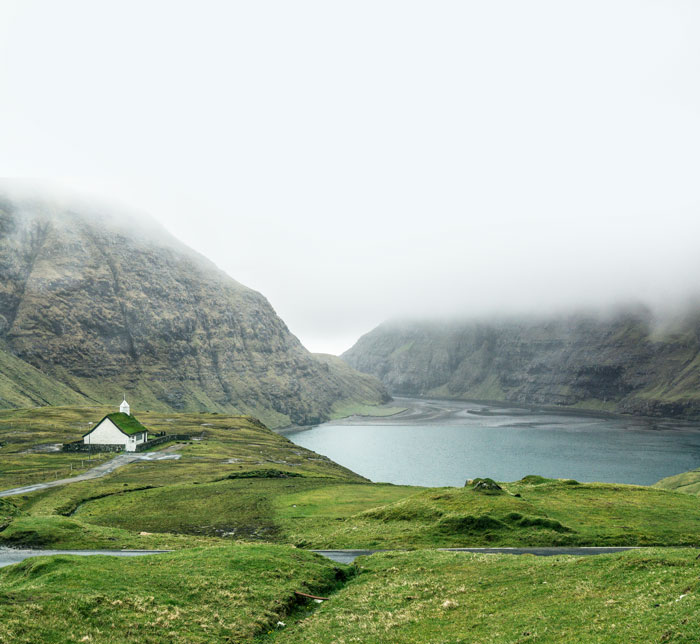 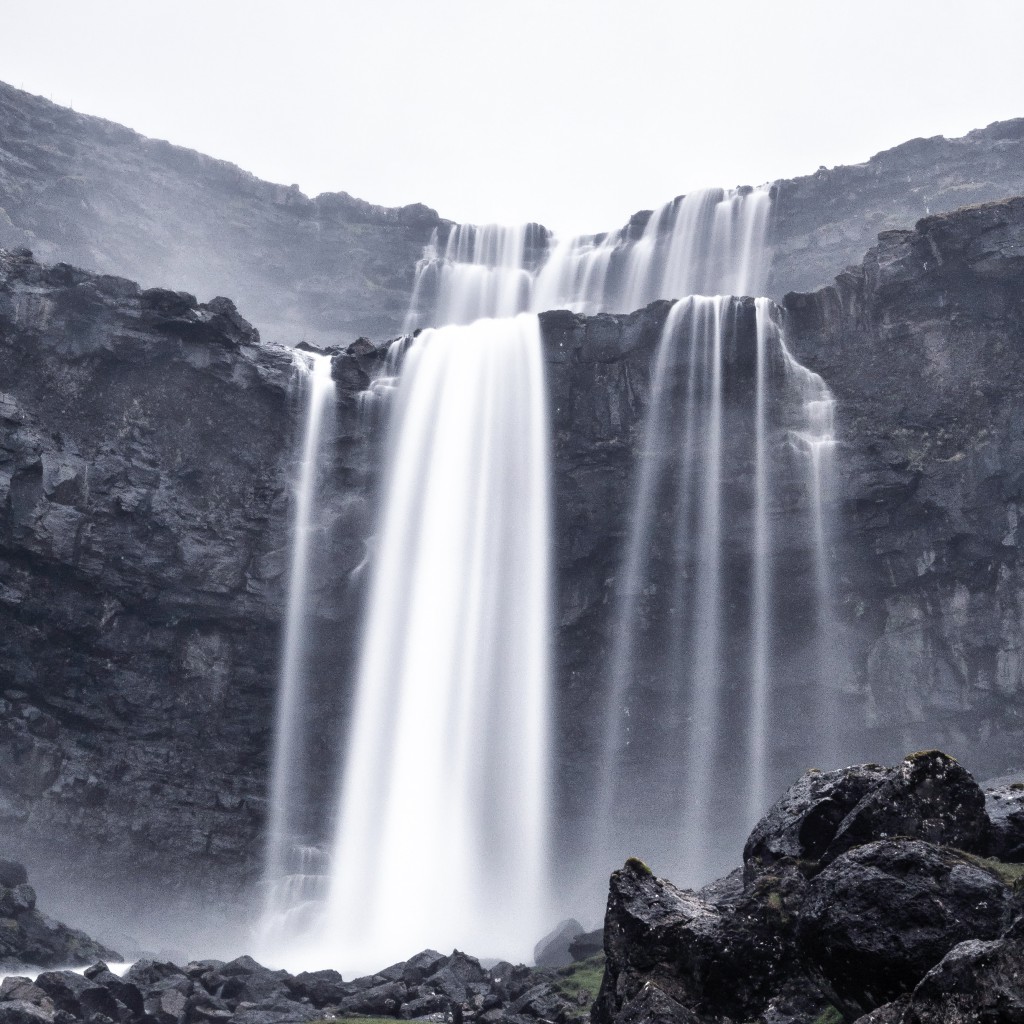 Right before you reach the town Tjørnuvík you can spot the highest waterfall on the Faroe Islands by the roadside. It’s simply called Fossa – waterfall. 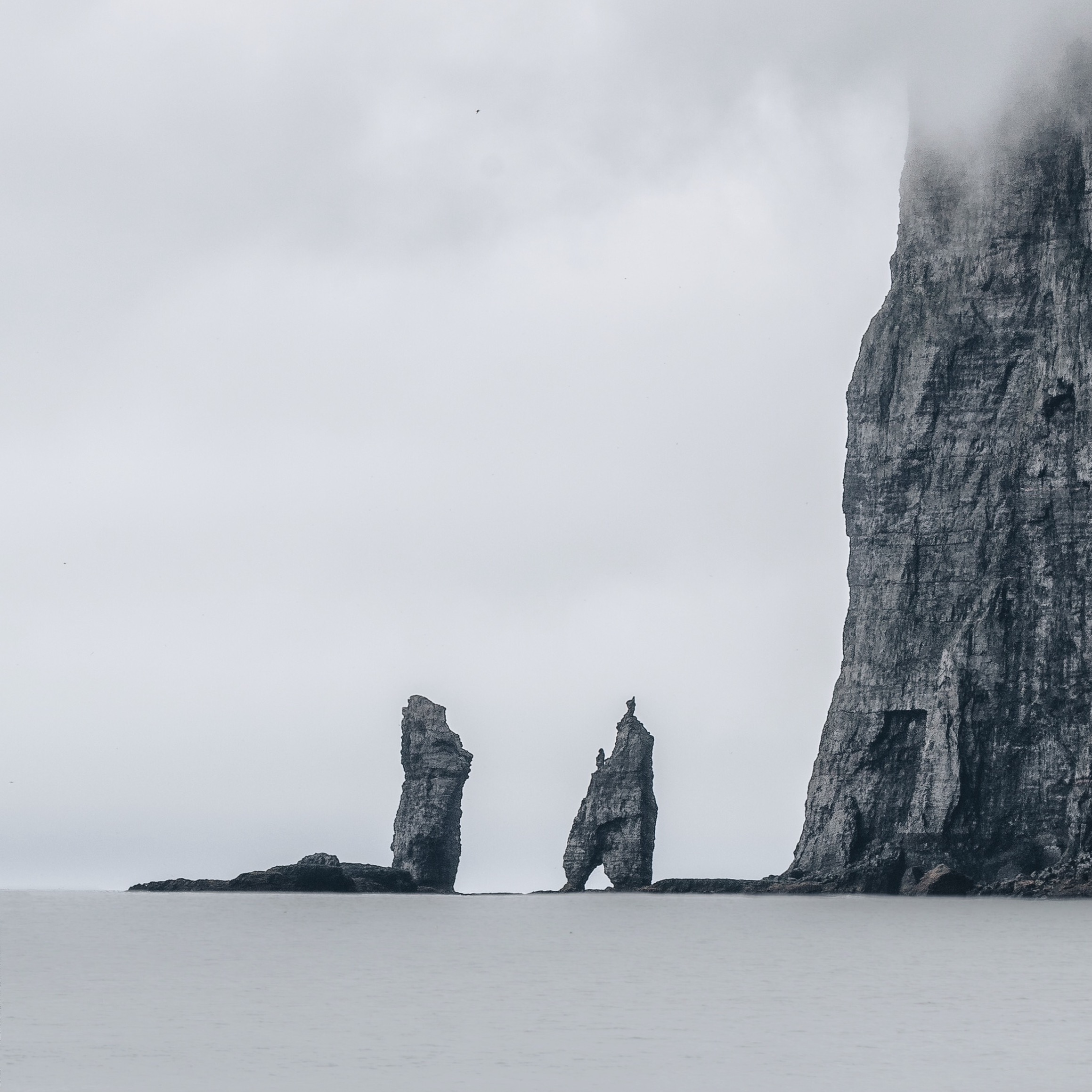 Risin and Kellingin – two rock formations that can be seen from the town Tjørnuvík. The legend says that the giants in Iceland were jealous and wanted the Faroe Islands so they sent the two giants Risin and Kellingin (the giant and the witch) to pull the islands nearer. They were so busy they didn’t notice the sunrise and turned to stone in the morning light. 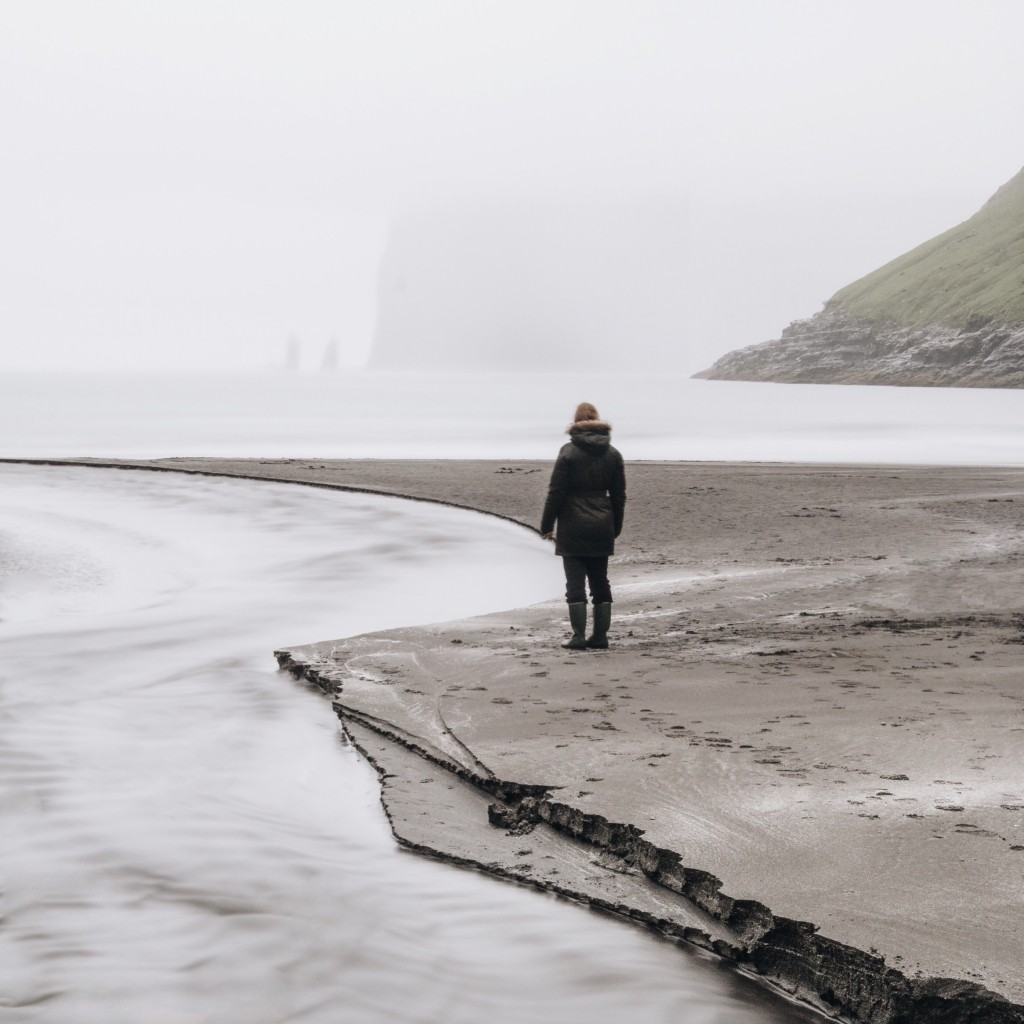 I wanted to take a self portrait with Risin and Kellingin but they didn’t want to cooperate and just disappeared into the rain.

After our trip around northern Streymoy our road trip continued to Eysturoy and the town Fuglafjørður where we stayed in a private bed & breakfast.

You can find B&B’s around the islands here

I wanted to see the northern islands because they are the most remote and dramatic of all the islands. We visited Viðoy, Borðoy and Kalsoy in one day. 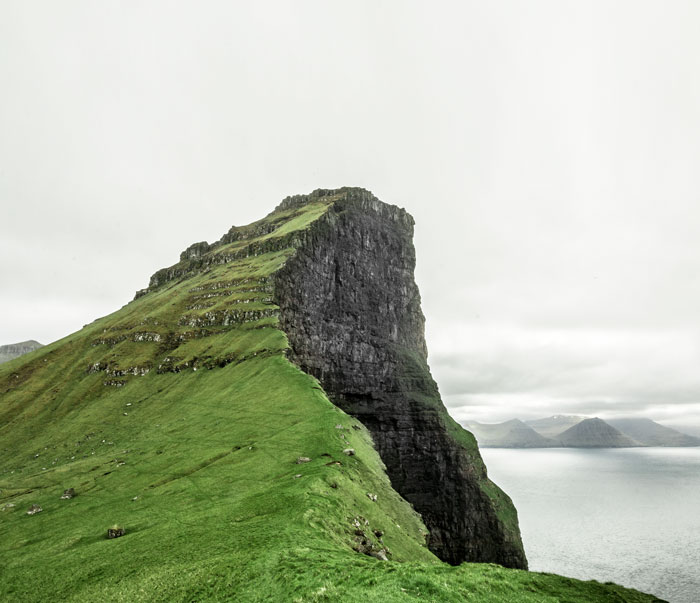 The northern tip of Kalsoy. You need to take a car ferry and drive through four narrow tunnels to get there. From the small town Trøllanes there is a 40 minutes hike to the lighthouse where this shot is taken. Kalsoy means man island and right next to it is Kunoy – the woman island. 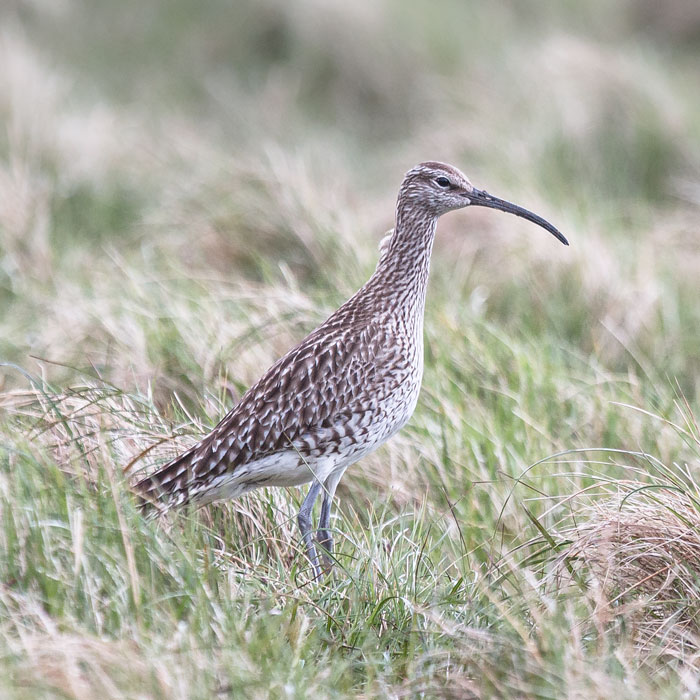 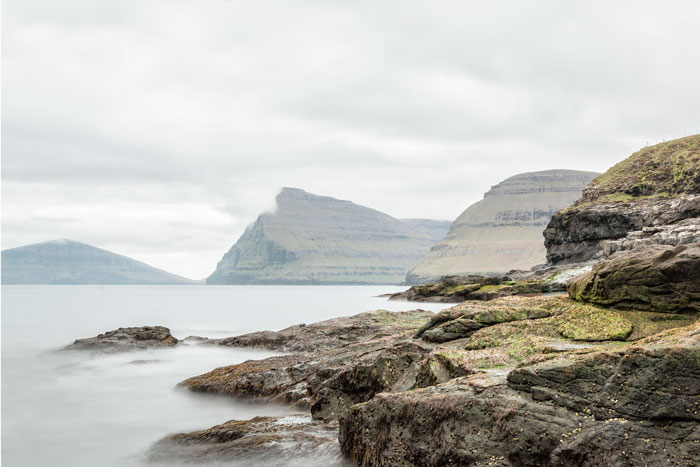 Timetable for the ferry to Kalsoy

We left out lovely B&B and set sails for Tórshavn. But first we drove north through the highest mountain Slætteratindur and after a few hair needle turns we landed in the town with the odd name Gjógv. 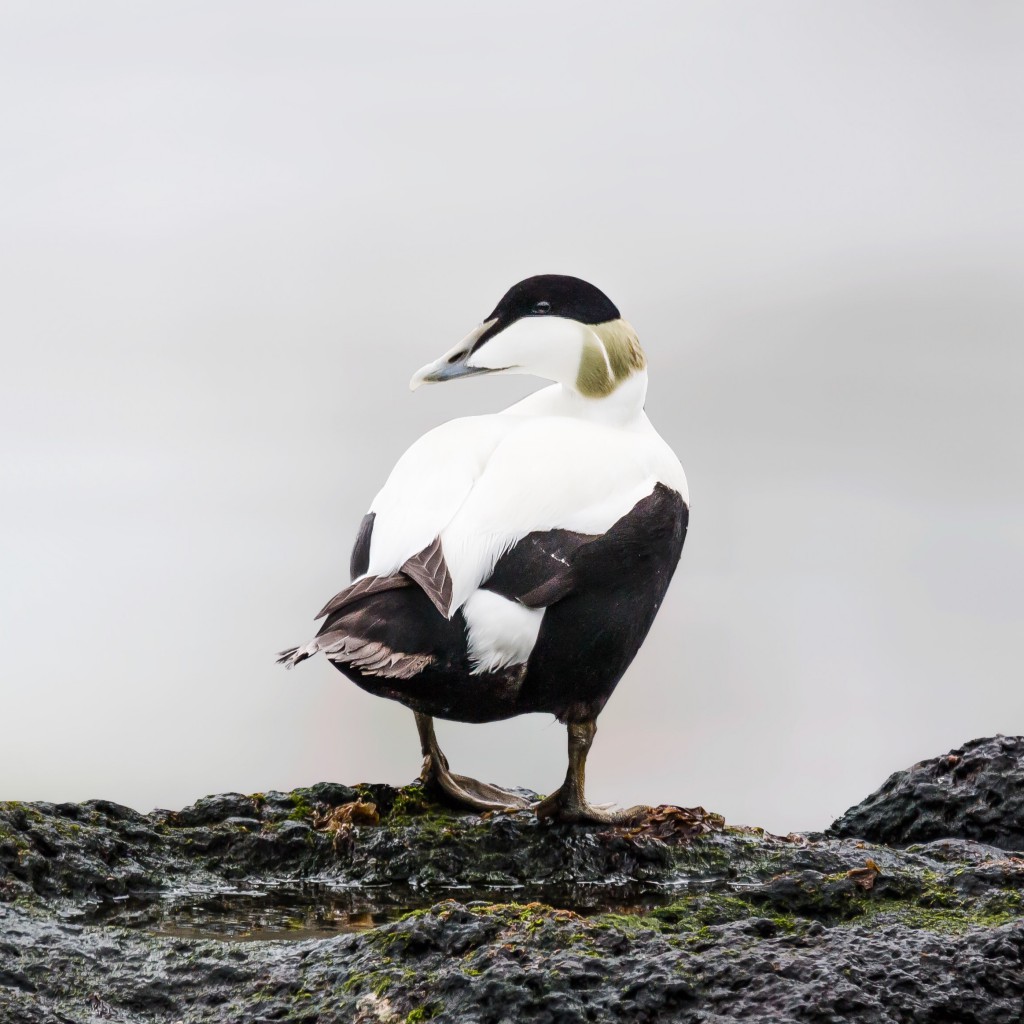 Lots of eider ducklings on the cliffs in Gjógv. This is daddy eider. 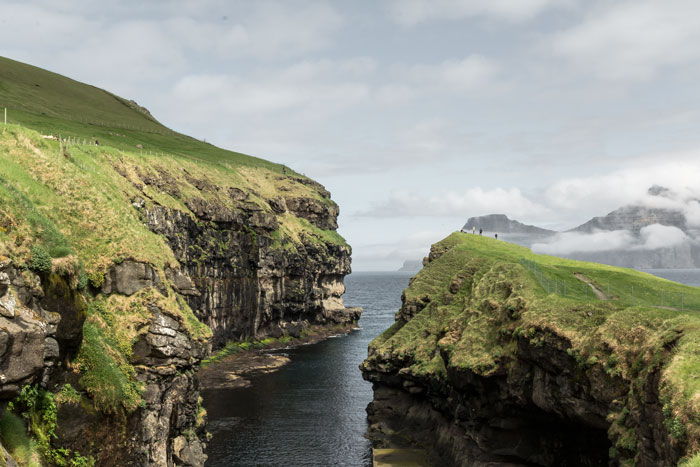 The natural habour in Gjógv 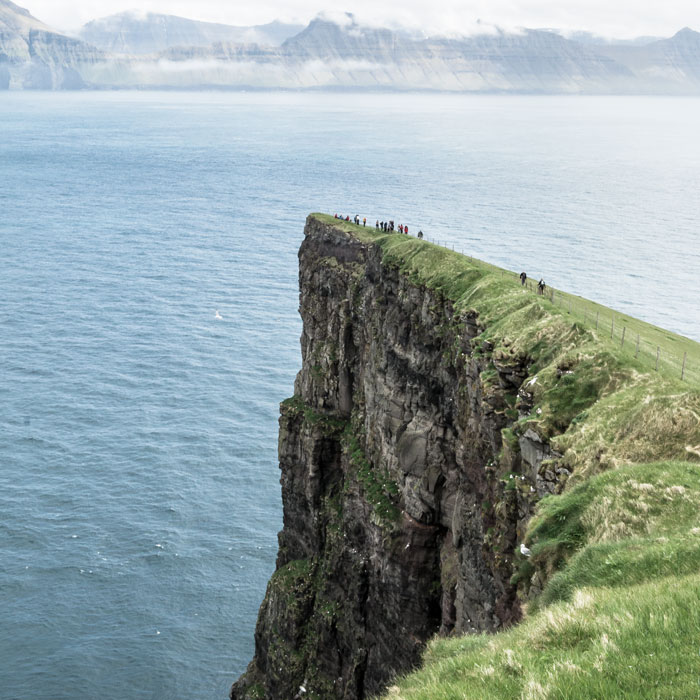 Left of the harbour there is a path up the mountainside to a lovely viewpoint.

In Tórshavn we stayed in Tora Guesthouse. A little old and worn but cheap after scandinavian standards (around 70 euros per night). From here we took a trip to Kirkjubøur – a pretty little town with historic buildings and a museum that by the time we visited also housed a petting lamb and a calf. The rest of the time we relaxed in cafés in Tórshavn, drinking hot chocolate and trying to keep warm. Tórshavn is a very small capital with only  little to see, but remember to take a walk by the harbour with the old red buildings that still houses the Faroese government.

Here is a list of places to stay in Tórshavn 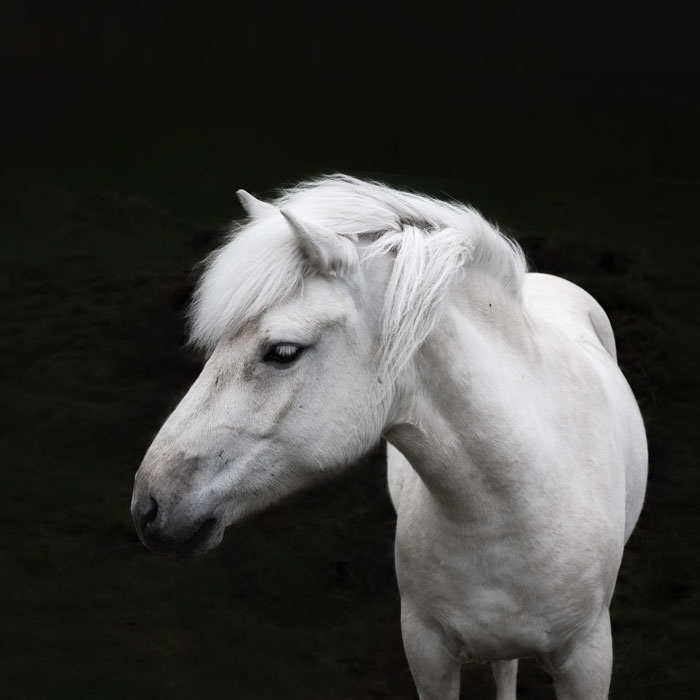 A pretty white icelandic horse I found in Kirkjubøur

On our way back to the airport we managed to visit a few of those places that we missed on our second day – the one with the heavy rain.

If you drive through the town Sandavágur there is a sign and a path leading to the rock Trøllkonufingur – the witch’s finger. And it is kind of spooky isn’t it?

We planned to walk along this lake called Leitisvatn (or Sørvágsvatn) – the largest lake on the Faroe Islands – to the waterfall Bøsdalafossur but we didn’t have enough time before our flight back. I am definitely putting this on my list if I ever come back to the Faroe Islands someday.

Map of our route around the Faroe Islands 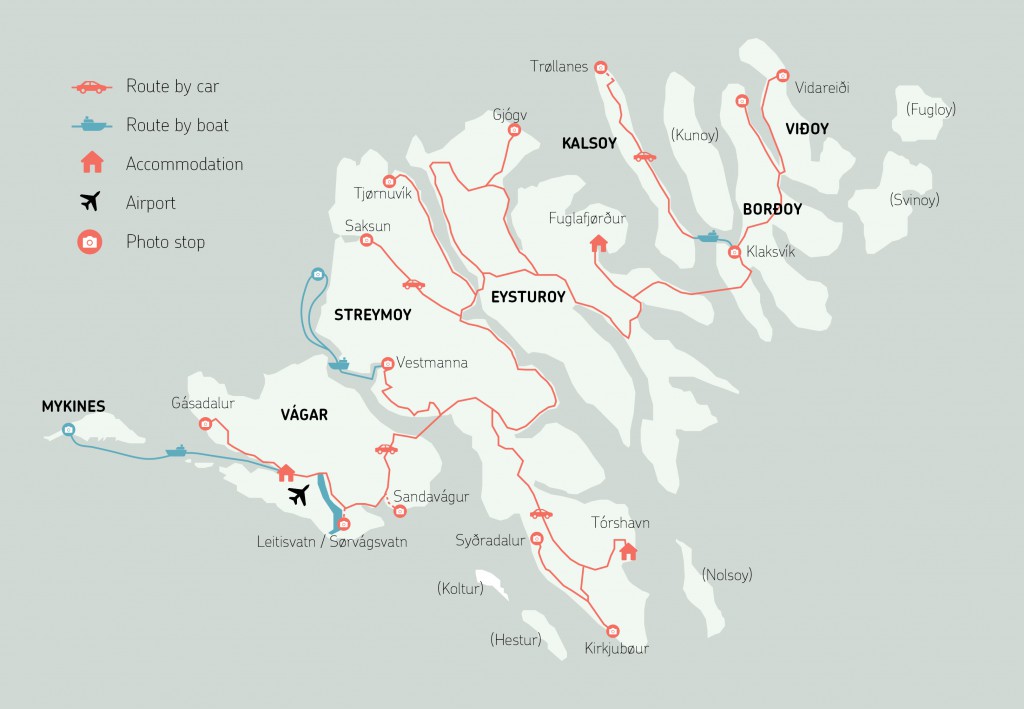 A road map of our route around the Faroe Islands. I have left out the southern islands Sandoy and Suðuroy. Click on map for larger version.

How is the weather? – best time to visit

Our trip was in early June. If you want to see the puffins on Mykines you need to be there in the summer from may until august. The rest of the year the puffins is out at sea. Most people visit the Faroes in summer when the chances of sunny days are greatest but you can visit the islands year round. In fall the green grass turns beautifully golden, in winter there can be snowfall but the warm gulf stream makes sure that it never really gets extremly cold. Regardsless of the season the weather on the Faroe Islands is changable with rain, fog and wind. In summer the average temperature is 11 degrees celcius – in winter 3 degrees.

How to get to The Faroe Islands

Flights to the Faroes

There are two airlines that fly to the Faroe Islands – Scandinavian Airlines and the local airline Atlantic Airways. You can fly non-stop from from Copenhagen, Bergen, Reykjavik and Edinburgh and the flight takes from 1-2 hours. You will land on the Island Vágar in Vágar Airport.

It is also possible to sail to the Faroes from Hirtshals in Denmark or Seyðisfjørðu in Iceland. This way you can bring your own car and travel in a slower and more sustainable way. The route is operated by Smyril Line. 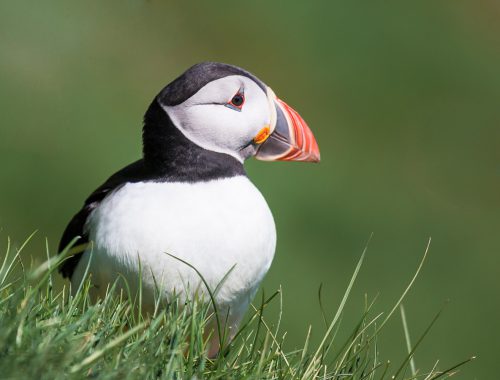 The Faroe Islands: A 7 days itinerary with puffins and route map 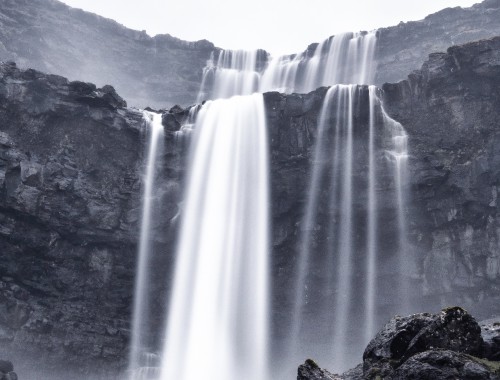 Fossá – the tallest waterfall on the Faroe Islands – a travel guide